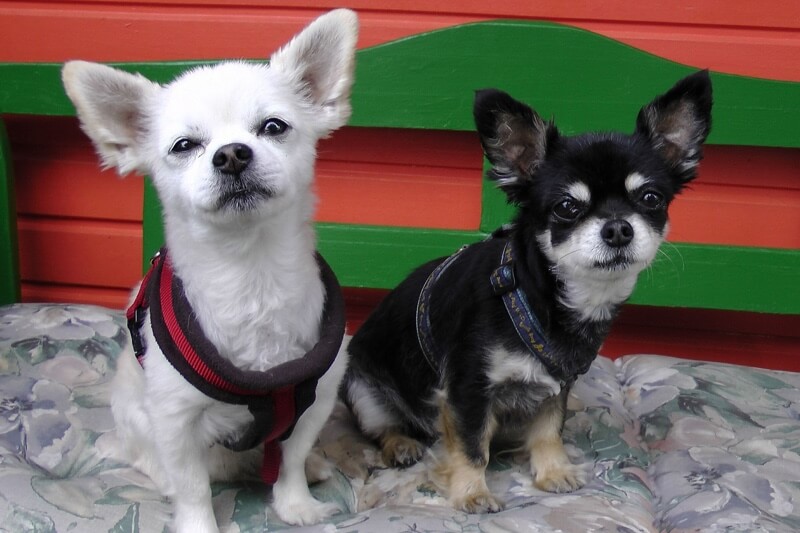 Chihuahuas are best known for their teensy size, big round eyes, and propensity to shiver and shake. But there are lots of other interesting facts about this toy dog breed from their history to their popularity as a celebrity companion.

While there is some debate about the origins of Chihuahuas, it seems likely that this breed originated in Mexico. The name Chihuahua comes from the Mexican state of the same name, which borders Arizona, Texas, and New Mexico. It’s thought that these dogs found their way into the United States when they were sold to tourists traveling across the border.

There is evidence that Chihuahuas trace their lineage back to the Techichi, who were companion animals domesticated by the Toltecs of ancient Mexico. The upper-class Toltecs believed the Techichi were sacred animals that could guide the soul to the afterworld. Many Techichi were buried with their masters based on this belief.

In addition to the Techichis, Chihuahuas may have older ancestors as part of their lineage. Artifacts with images of small, big-eyed dogs resembling Chihuahuas were found in El Salvador, Mexico, and the Unites States. They date back to around 100 A.D. and may have been part of a child’s toy. 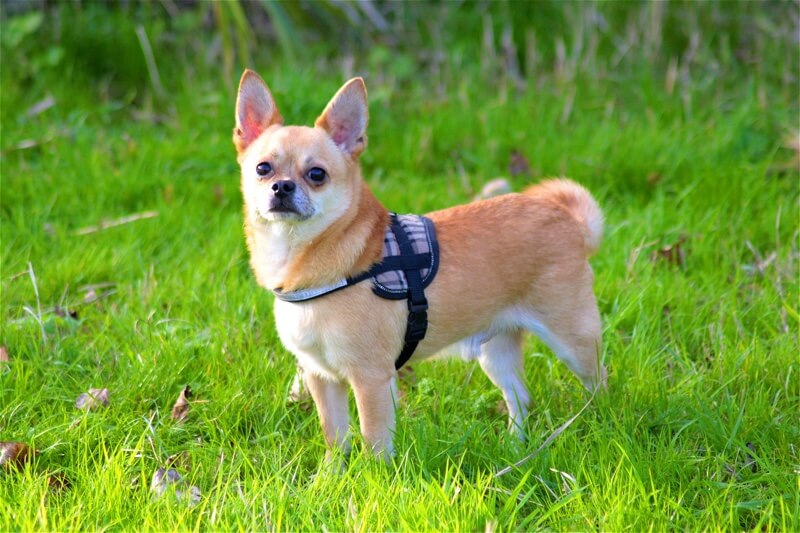 Chihuahuas are famous for being the smallest breed around with Yorkshire Terriers coming in at a close second. They typically weigh between 2 and 6 pounds and can be around 6 to 9 inches tall.

Aside from their obvious small size, Chihuahuas are recognizable by other physical characteristics. For instance, they tend to have large round eyes, which can protrude from their heads. They also have ears that stick up straight rather than lie flat or flop around.

Chihuahuas can be almost any color combination, including solid or spotted, and come in a variety of colors. Some of the more common Chihuahua colors are black, white, brown, fawn, and red.

There are two types of Chihuahuas: 1) Smooth Coat (short haired), and 2) Long Coat. As you can tell by those names, the main difference between them is the length of their fur.

If you’re deciding which type is right for you, keep in mind that Long Coat Chihuahuas typically shed more than their Smooth Coat brethren. They may also need more brushing and grooming to keep their fur in top shape.

In addition to coat lengths, Chihuahuas have two different kinds of head shapes. There are Apple Heads who have full, round heads like the fruit, and Deer Heads that have a narrower face, which resembles that of a deer. 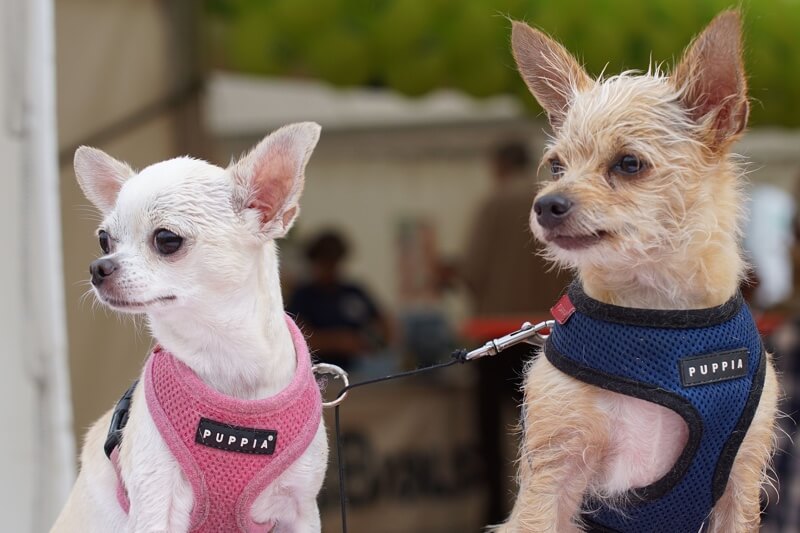 Chihuahuas may appear tiny and frail, but like other small toy dogs, they can live long lives. In fact, small dogs tend to live longer than larger breeds on average. For instance, a healthy Chihuahua might live to 15 or even 20 years old while medium and large dogs tend to live to between 10 and 13 years old.

The Chihuahua is also a relatively healthy breed of dog, which can help extend lifespan.

In cartoons, Chihuahuas are often portrayed as being too big for their britches—running around and yipping at much larger dogs! While some Chihuahuas may act this way, personality is determined more by factors like a dog’s environment, experiences, health, and age than by breed.

If you talk with pet parents of Chihuahuas, you’ll see that their personalities can be all over the map. They may be described as fun and outgoing, shy and anxious, sassy and playful, or serious and reserved—or maybe a mix of these depending on the time of day! These dogs are known to like the company of other Chihuahuas, so may be happier living with a Chihuahua pal in the home. 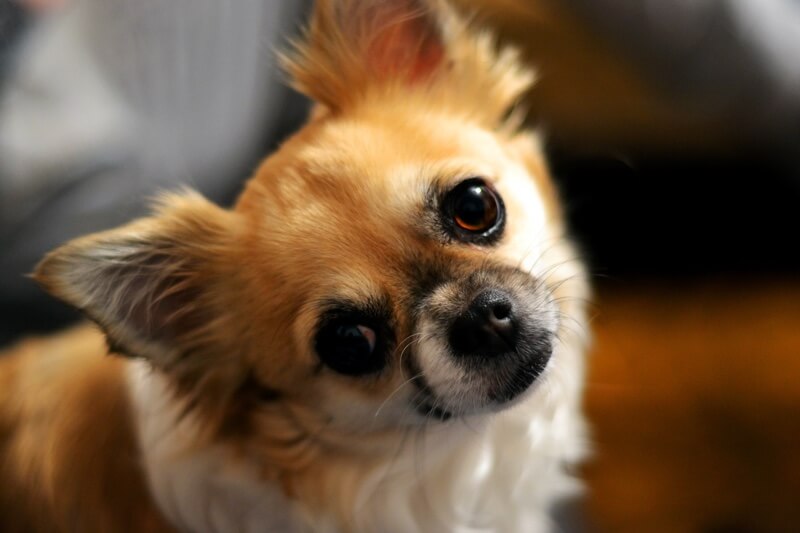 Why Do Chihuahuas Shiver?

Chihuahuas don’t tolerate the cold well and may shiver and shake to stay warm. If your Chihuahua is chilly, put on a small dog shirt or coat, and make sure you have a warm and cozy dog bed readily available. If it’s frightfully cold outside, you may need to keep your Chihuahua inside. Some Chihuahua owners use an indoor pee pad so their tiny friends don’t have to brave the cold. Get more cold weather tips for dogs.

These small dogs can also shiver when they’re anxious or excited. A dog coat won’t help this kind of shivering, but you can try to avoid exposing your little friend to stressful or overwhelming situations. For instance, if your dog is fretful around other dogs you may want to consider a training class designed to help dogs be more comfortable with other dogs, until then, try to take walks on more isolated paths.

Chihuahuas are known to be a relatively healthy breed of dog. However, they can be prone to specific health issues, which are often related to their small build.

Obesity is a growing problem among all dogs and something you should be mindful of with a petite pooch.  It’s easy to overfeed small dogs, and they can put on weight rather quickly if they’re eating too much or not getting enough exercise. If you have a Chihuahua, be sure to talk with your veterinarian about proper nutrition and exercise. 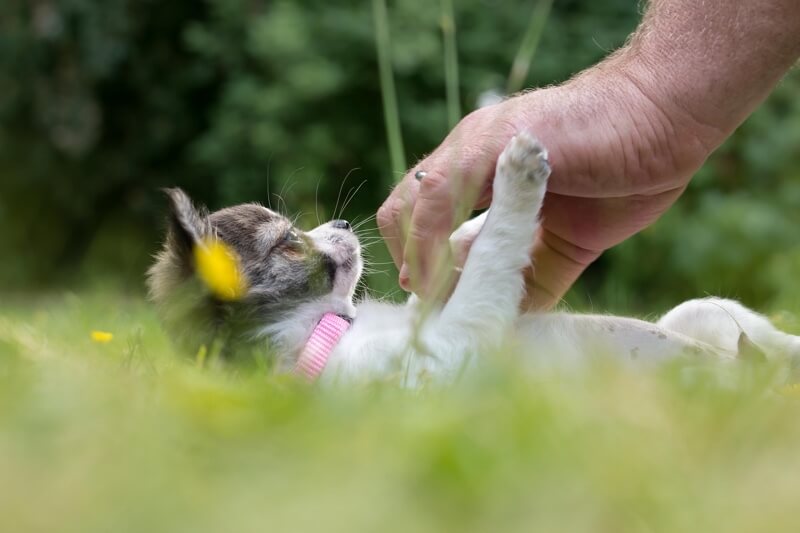 Hypoglycemia or low blood sugar can be a problem for small toy dogs, like Chihuahuas. Signs of hypoglycemia can include:

It can be useful to feed your Chihuahua small bits of food frequently throughout the day to help maintain healthy blood sugar levels and avoid hypoglycemia. You may also want to carry a sugar supplement with you just in case hypoglycemia sets in. Sugar supplements are available at pet stores, or you can carry a small container of Karo syrup or honey. The supplement is typically rubbed on the gums and roof of the dog’s mouth to raise the body’s sugar level quickly.

Just be sure to talk with your veterinarian before starting any supplement plan!

Have you ever seen a Chihuahua stick a leg out very straight? They may be trying to fix an issue called a luxating patella where the kneecap slips sideways. A luxating patella (luxating means moving around, and patella refers to the knee) is caused by a genetic condition where the bones of the knee form in such a way that the kneecap is able to shift out of place more easily.

Chihuahuas may be able to remedy the issue on their own with that move of straightening the leg and relaxing/tightening the leg muscles. If you have a Chihuahua, you should ask your veterinarian how to handle a luxating patella, especially if it is causing ongoing discomfort or mobility problems for your dog.

Chihuahua parents may want to consider dog insurance early on.

Apple-headed Chihuahuas are born with a soft spot (also called a molera) in their skulls where the bones have not fully formed and closed together (much like the soft spot on the head of a newborn baby). This is not an abnormality for Chihuahuas, but rather a trait that allows their large, round heads to pass more easily through the birth canal. Chihuahua parents need to be careful not to injure the soft spot, which typically closes up at about six months old.

Like other breeds with large eyes, Chihuahuas can be more prone to eye injuries or infections. This is one reason Chihuahua parents may want to consider dog insurance early on. A dog insurance plan can help them manage the costs of common eye injuries and infections, which may require medications and other treatments. 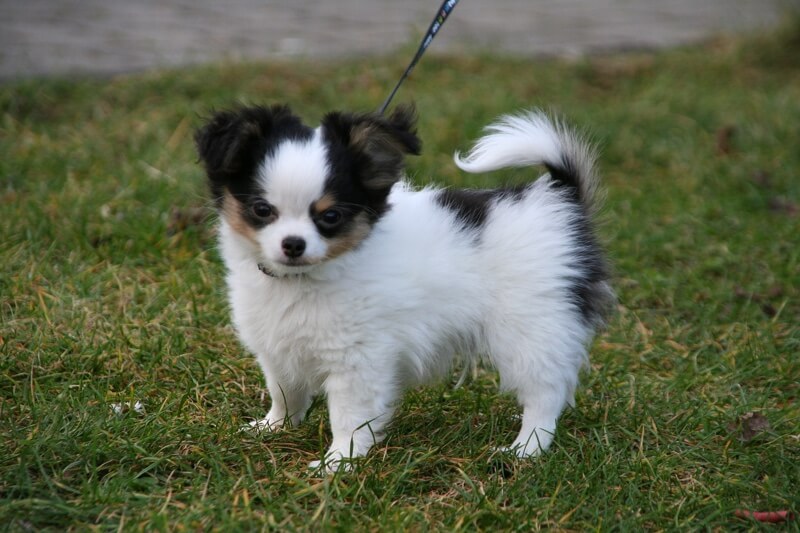 Chihuahuas have made their way onto the big screen and into the arms of some well-known celebrities. How many of these famous little guys and gals do you recognize?

This fabulously dressed Chihuahua was toted around by Elle Woods (Reese Witherspoon) in Legally Blonde and Legally Blonde 2: Red, White & Blonde. Played by a Chihuahua named Moonie, this cutie-pie played a central role in the sequel, which had a plot line around animal rights.

The Chihuahua’s ties to Mexico made this breed a good pick to play the Taco Bell mascot in a number of commercials. Who could forget that catch phrase: “¡Yo quiero Taco Bell!" The Taco Bell Chihuahua was a pooch named Gidget, who passed away in 2009 at the age of 15.

The Ren and Stimpy Show was a controversial cartoon on the Nickelodeon network, which starred Ren, a rather hotheaded Chihuahua who hung out with his sidekick Stimpy, a not-so-bright cat.

Paris Hilton made her dog Tinkerbell a star by carrying her around in luxurious designer bags and featuring her in photo shoots. You could say that Paris and Tinkerbell started the trend of small dogs as must-have companions.

Please keep in mind that Chihuahuas should never be adopted as “accessories.” Unfortunately, there have been too many cases where Chihuahuas were returned to shelters because their pet parents didn’t consider all of the responsibilities that come with having a dog. If you’re thinking about bringing home a Chihuahua, make sure you’re ready to give them the love and care they need to live a long and healthy life.

Tinkerbell and Bruiser are definitely near the top of the list for Chihuahua names. If you’re trying to come with a name for your new Chihuahua pal, you can also consider some of these ideas based on size, personality, coloring, or just for fun.

If you have a pair of Chihuahuas, you might want to name them Lilo and Stitch, Ponch and Jon (remember the show CHIPs?), or Lucy and Ethel.

Chihuahuas are fantastic dogs, but like any pet, they come with lots of responsibility. As a dog parent to a Chihuahua, you need to provide preventative care, like vaccines and dental cleanings, and treatment in case of unexpected accidents or illnesses, including ailments common in small dogs. An ASPCA Pet Health Insurance plan can help you manage those costs. Get your free quote now!