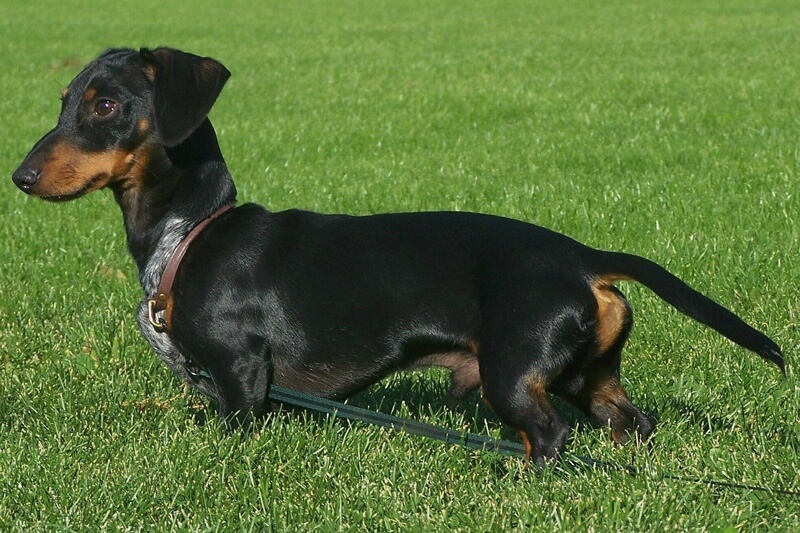 you’re a proud pet parent to a loveable, long-bodied Dachshund, you’re in good company. In fact, you can count esteemed pet parents like Queen Victoria, John F. Kennedy, Andy Warhol, and Pablo Picasso among your peers.

These folks famously loved their Dachshund pals. Picasso’s pup “Lump” was even considered to be a great source of inspiration to the artist. What’s so delightful about Dachshunds? Keep reading for wiener dog fun facts!

You probably know them for their distinct long-bodied, short-legged appearance. But exactly what classification are they? That depends on who you ask. With characteristics of both hounds and terriers, Dachshunds are tricky to classify. In the U.S. and Great Britain, they are considered part of the scent hound group. Dachshunds are incredible hunters who adore tracking small critters, burrowing right into their holes to catch them. However, the World Canine Federation has created a separate classification just for Dachshunds based on how much variety there is within the breed.

Do you prefer a mischievous, wirehaired canine companion? Or maybe you’re more the type to curl up with an impossibly adorable mini-pooch. With Dachshunds, their size and coat variations make up some really diverse combinations.

Dachshunds come in two basic sizes: standard and miniature. Both types are typically less than 9-inches tall with the distinction depending more on their weight than height. Standard Dachshunds weigh 16-32 pounds. Miniatures weigh in at 12 pounds and under.

What about that gray area in between? Some Dachshund enthusiasts identify pups in the 12-16 pound range as “tweenies.” Let’s just hope Dachshund tweenies take fewer selfies and exhibit less ‘tude than the human tweens we see! 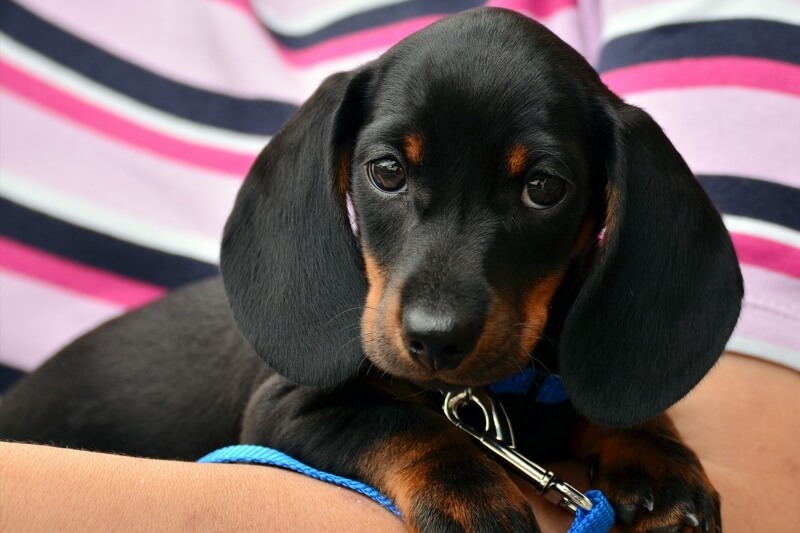 Some people believe that the breed dates all the way back to ancient Egypt due to mummified remains that have been found in Egyptian burial urns and engravings of short-legged hunting dogs. While today’s Dachshunds sure do look regal, we can’t be certain of this theory. What we do know is that the word “Dachshund” comes from the German words dachs (badger) and hund (dog).

Note, as a German word, Dachshund is pronounced with the first syllable rhyming with “rock,” – not “cash.”

These “badger dogs” were likely created by German breeders who wanted a smaller hunting companion to track badgers and other burrow-dwelling game like rabbits and foxes. Like most scent hounds, the Dachshund breed probably descended from the Saint Hubert Hound, but with unique elements from German, French, and English hounds and terriers. When did Dachshunds come onto the scene? Hard to say exactly, but the first written reference to Dachshunds can be found in the 18th century when they were referred to in print as dachs kreiger – the “badger warrior.” Sounds fierce! 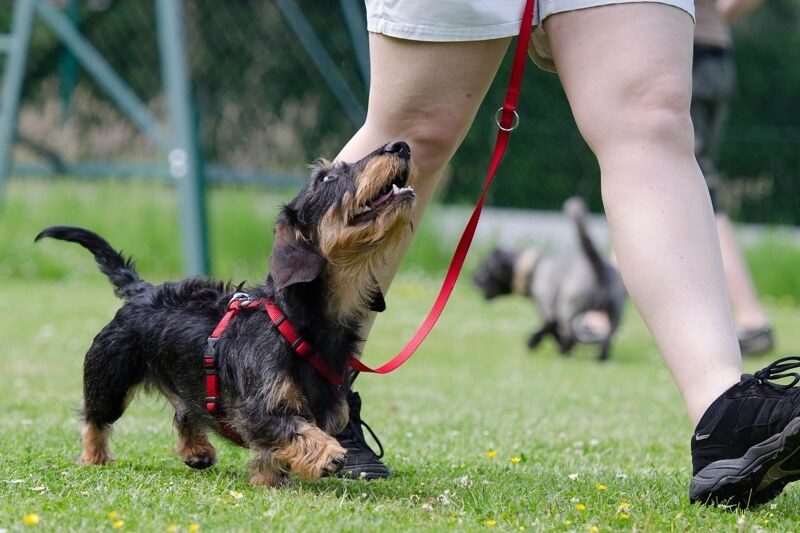 Dachshunds have earned the somewhat silly nickname “wiener dog” because of their quintessential long body shape and short legs. But don’t be fooled – they are actually very muscular. They also have a deeper barrel chest and much larger lung capacity than most dogs their size. You probably already know that if you parent a Dachshund pooch since this gives them a much louder bark than most small dogs, too!

Flap-down ears and a curved tail are other classic Dachshund features. Interestingly, these attributes were intentionally bred to strengthen the breed as hunters. The flap-down ears protect the ear canal from dirt, seeds, and other objects that could get inside and cause problems when a Dachshund is digging. The curved tail is easier to spot in tall grasses and can help a pup’s human hunting pal find them if they get stuck in a burrow.

Just as they present a variety of coat types, Dachshunds also come in an array of colors. The most common is red with the black-and-tan combo as a close second. They can range from a very light Isabella cream to a deep chocolate to black. Dachshunds can be single-colored, as is most common with red beauties, or they can exhibit striking patterns, including dapple, brindle, and sable.

Dachshunds are lively, playful and clever. They have a reputation for being on the stubborn side, too. Fiercely loyal, Dachshunds often bond very closely with just one person and can get jealous easily and become lonely if not given enough attention by the object of their affection. Remember, they’re bred to burrow, so Dachshunds might become destructive, burrowing and chewing their way through your home if left unattended for too long.

They are best suited for single adults or families with older children. Dachshunds don’t handle teasing well (and could get snippy), and their bodies aren’t equipped for toddlers who may try to jump on them. Because they only require a couple of half-mile walks a day and indoor exercise to keep them fit, Dachshunds are great for city dwellers.

Some people think a Dachshund’s personality is influenced by its coat type, too. Longhaired pups are thought to be mellower, while Wirehaired Dachshunds are more energetic and, possibly, more mischievous.

Dachshunds are average shedders with moderate grooming needs. Of course, what type of coat your Dachshund has affects how often you need to groom. Here are a few basics: 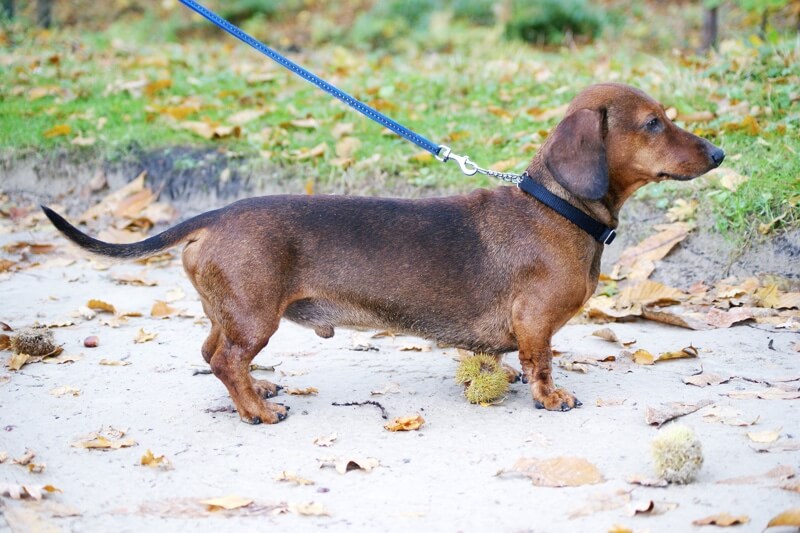 These pooches need a weekly brushing. A regular soft bristle brush will do the trick. 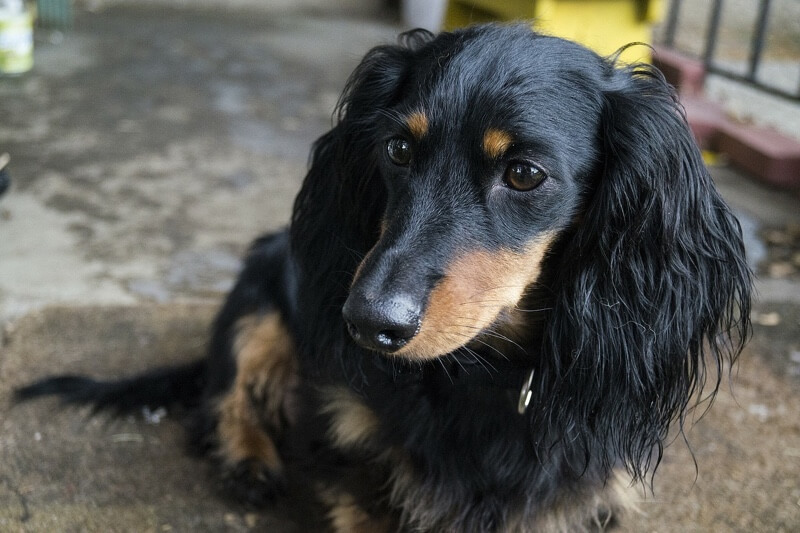 You’ll want to brush and comb a longhaired pup’s silky locks daily, and you’ll need a stiff bristled brush for this job. These dogs can easily develop mats, especially behind the ears and under the belly, so check with each grooming. You can usually untangle mats by hand. 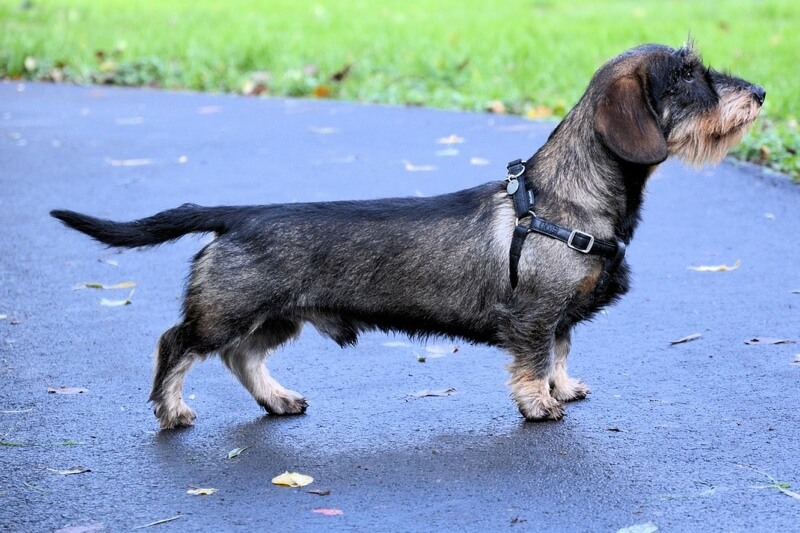 Wirehaired doggies need frequent brushings with a short-napped wire bristle brush. A couple of times a year, you’ll need to “strip” your furry friend. This is a technique to remove the hair at the root when it gets too thick.

Dachshunds are fairly intelligent dogs, but they sure can be obstinate. They have a few characteristics that you might want to consider when training as well, such as a high potential for wanderlust, a tendency to bark and howl, and a high prey drive. The earlier you start training a Dachshund, the more success you can expect. Be patient, firm, and consistent, and most Dachshunds will respond well. They actually learn quite fast when they feel motivated and supported. Incorporate treats and their favorite toys, and try to keep training sessions short. 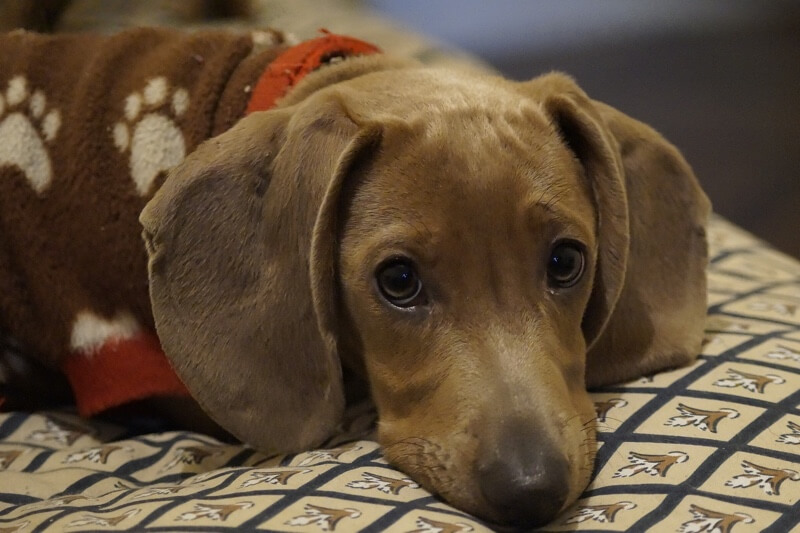 When properly cared for, Dachshunds live 12-14 years, but sometimes make it to the ripe old age of 16. Not surprisingly, their most defining attribute – their long body – is also what causes their most frequent health issues. Dachshunds are prone to spinal problems, especially intervertebral disk disease (IVDD) due to their long spinal column and short rib cage. In fact, 25% of Dachshunds develop this condition* at some point in their lives. Obesity, rough housing, over-exercising, and any activity that puts strain on the spine increases the risk. If you have a Dachshund, you might notice they are resistant to being picked up. Respect their wishes; that’s their way of protecting their spine.

Aside from spinal problems, Dachshunds are susceptible to patellar luxation (dislodging of the kneecap) and brittle bone disease. Hereditary conditions include epilepsy, Cushing’s Disease, and thyroid and autoimmune disorders.

If you’re a pet parent to one of these wonderful dogs, remember that an ASPCA Pet Health Insurance plan can help you give your Dachshund the best care possible.