With a playful spirit, love of entertaining, and tendency to snort, French Bulldogs have earned the nickname “clown dogs.” Their distinctive bat-like ears are pretty amusing, too!

Of course, our Frenchie friends also have a reputation for being a high-class breed with French Bulldog pet parents including Leonardo DiCaprio, Lady Gaga, and Martha Stewert – who even has a blog dedicated to her pups. Historically, the French Bulldog was so elite that one pooch named Gamin de Pycombe was one of only 13 dogs aboard the Titanic. So what are French Bulldogs really like? Keep reading!

Classified as a companion dog, the French Bulldog is an incredible family dog and one of the top 10 breeds in the United States. These pups are sweet, friendly people pleasers who adore cuddling, enjoy following you from room to room–but will do so quietly–and also get a kick out of performing when they have an audience. Fully grown, French Bulldogs weigh 16-28 pounds and stand approximately one-foot-tall at the shoulder. Their average lifespan is 11-14 years. 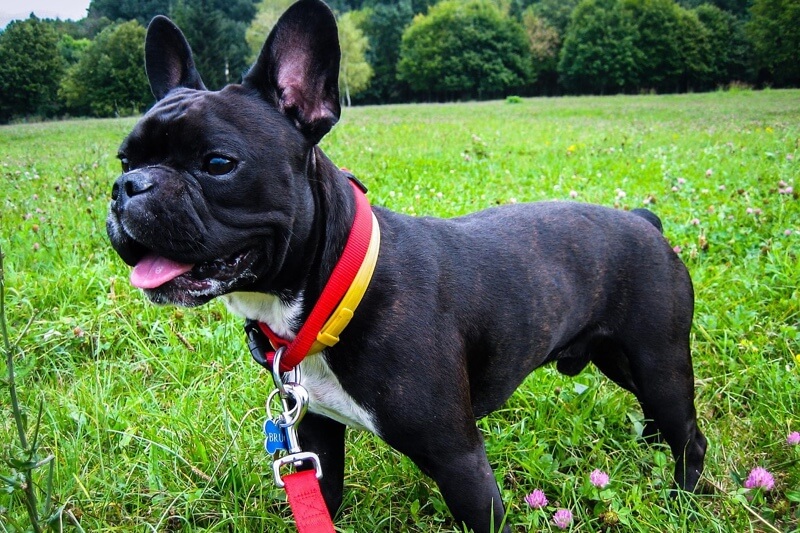 Ironically, the French Bulldog breed originated in Jolly Old England. These pups are cousins to the English Bulldog, which descended from the Bullenbeisser sport dogs, a sub family of the ancient Greek Molossian breed that was originally used for bull baiting.

When blood sports were outlawed in England in 1835, English Bulldogs emerged as companion dogs and were bred with terriers and Pugs to reduce their size. The toy size was very popular with the lace workers in Nottingham because these docile and loyal pooches would warm the workers’ laps by day and rid the workshops of rats by night.

The Industrial Revolution mechanized laceworks in England, and many of these skilled workers immigrated to France, taking their pups with them, of course. The curious toy-sized, bat-eared bulldogs were an instant hit with the French bohemians, and soon writers, artists, fashion designers, and working girls all over Paris were requesting the lovable pups. The English breeders couldn’t believe their luck – they’d always considered the breed’s ears a flaw – so they happily began sending over all of the bat-eared bulldogs, whom the French began calling Bouledogue Francais, as in boule for “ball” and dogue for “mastiff” or “molosser.” Before long, the high-society ladies fell in love with the pups, too, and the French Bulldog became a status symbol.

The breed first appeared in the United States in the late 19th century. They were very well received, earning the nickname “Frenchie,” as well as the affection of notable pet parents like the Rockefeller and J.P. Morgan families. 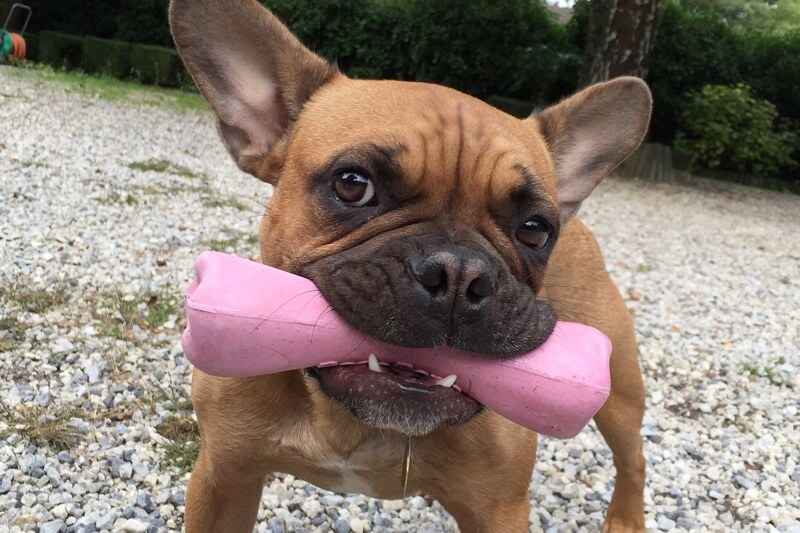 Aside from their size and bat-like ears, what makes French Bulldogs unique? Plenty! In addition to the elongated ears, other key differences from the English Bulldog include more alert facial expressions, rounder eyes, and a wider range of motion.

French Bulldogs keep a low center of gravity with their compact, muscular build and large, square head, and they walk with a recognizable bow-legged gait. A brachycephalic, or "flat-faced" breed, these pooches have those adorable smooshy faces that are just perfect for smooching. Their skin is loose and soft, forming wrinkles at the head and shoulders. Frenchies have a short, smooth coat that comes in a variety of colors. Most commonly, they come in shades of brindle, fawn, or tan. They can also be white with brindle patches, an effect known as “pied.”

French Bulldogs are easygoing, fun-loving additions to any family. True companion dogs, they thrive on human contact. They are patient with children, friendly with strangers, and loyal to their pet parents – sometimes to the point of being overly protective. Since they can be territorial, remember that socialization at a young age is a good idea. These social butterflies also enjoy the company of other canine companions.

Despite yearning for affection, Frenchies make excellent watchdogs because they hardly ever bark without reason. This trait also makes them a good fit for apartment dwellers who might worry about their pooch disturbing the neighbors. 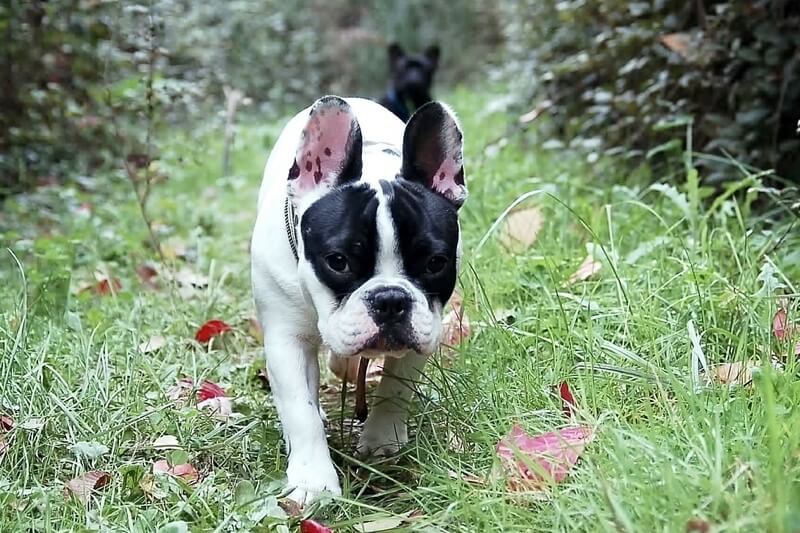 With a short, fine coat, your Frenchie’s grooming needs will be fairly easy to keep up with. You’ll want to brush your pal weekly with a rubber hound glove or soft bristle brush. During the fall and spring shedding seasons, you can remove any excess hair with a stripping comb. French Bulldogs need a bath about once a month. Just make sure you use a high-quality doggie shampoo, and follow these tips for bathing wrinkly dogs. It’s very important that you keep your pup’s wrinkles clean and always check for scabs or lesions that could lead to infections. Make sure to clean their ears regularly with a damp cloth and keep up with nail trimming, too.

Frenchies are fairly low energy and don’t need a lot of exercise, but make sure your pooch is getting a couple of 15 minute walks a day and some low-key play time. They don’t need a lot of room; just a ball and a little open space will do. However, it's very important to know that due to your pal’s bulky shape, naturally compacted airway, and thin coat, they have a tough time regulating their body temperature and are susceptible to heat exhaustion.

If you live in a hot climate, your Frenchie will be safer if you have air conditioning in your home. Limit walk times to early mornings and late evenings when the temperatures are more comfortable and always make sure your pup has access to shade and water if they are outside. Similarly, in cold weather, dress your canine companion in an extra layer to be safe.

If you’re planning a trip, be aware that some commercial airlines do not allow French Bulldogs to travel because the temperatures in the cargo space can be a danger to them. Additionally, French Bulldogs are not good swimmers, so if you own a swimming pool, make sure your pup does not have access. 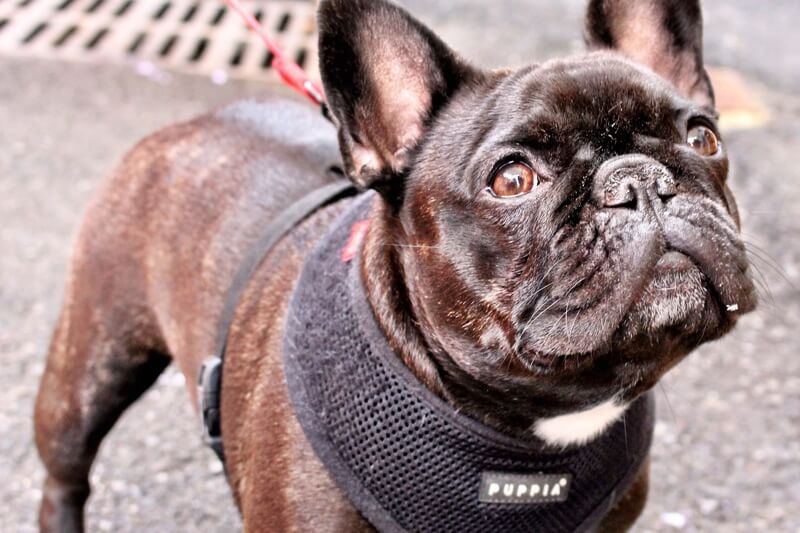 French Bulldogs are fairly intelligent little pooches, so training can be a positive experience for both of you if you incorporate lots of food, praise, and play. Make training feel like a game, and remember that Frenchies are people pleasers by nature. They are sensitive and respond far better to rewards than criticism.

French Bulldogs are free thinkers, which can lead to stubbornness, so they are not the best-suited breed for obedience and agility competitions. But with patience and consistency, housetraining and a few tricks for the sake of a good laugh should be easy enough to accomplish.

As mentioned, French Bulldogs are a brachycephalic breed, which means they are susceptible to Brachycephalic Syndrome. This affects dogs with that classic short head and narrow nostril combination and can result in all that adorable snoring and grunting that Frenchies are known for. But, unfortunately, it can also lead to complete airway collapse. Other respiratory issues include allergies and elongated soft palate, which can obstruct the airways.

French Bulldogs are prone to chondrodysplasia, a general term for back, spine, and disc issues. Of these, the most common are hemivertebrae, a malformation of the vertebrae that puts pressure on the spinal cord, and Intervertebral Disc Disease (IVDD), which is caused by a ruptured or herniated disc. These pups also have a lot of experience with hip dysplasia and patellar luxation, or having their kneecap slip out of place.

Any one of these conditions can result in a hefty veterinary bill. An ASPCA Pet Health Insurance plan can help you get the best care for the lovable Frenchie in your life. Get a free quote today and say au revoir to life without pet health coverage.