Inside Scoop on Cat Poop 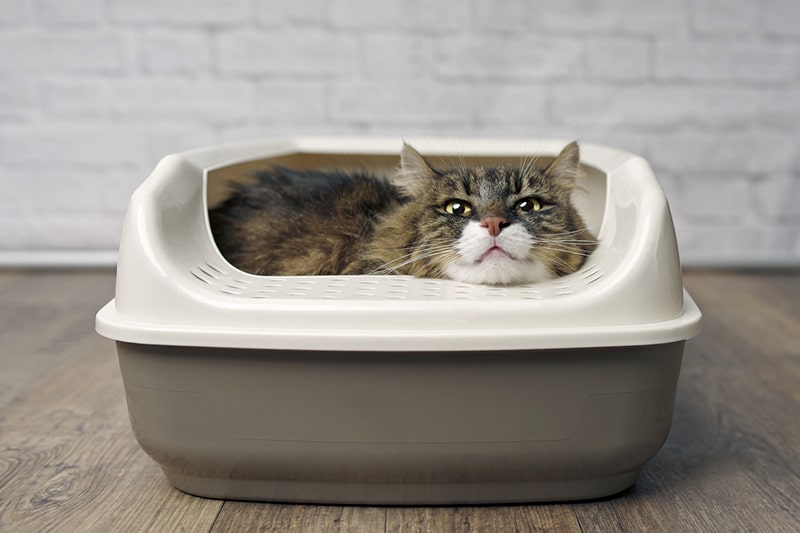 Everybody poops, including cats. But is your cat pooping enough? What does healthy cat poop look like? And what if that poop is ending up outside the box? Read on to get the answers to everything you’ve always wanted to know about cat poop but were afraid (or maybe just too grossed out!) to ask.

How often should a cat poop?

There is no specific frequency or timetable for cats to poop. It definitely varies from cat to cat. It can also change for individual cats if they’re suffering from an illness, feeling stressed out, or had a change in diet that’s affecting their digestive system.

As a general rule of thumb, cats will poop once, maybe twice a day. If your cat is pooping a lot more than that or missing a couple of days in a row, it’s not a bad idea to talk to your veterinarian. This may be your cat’s normal routine, but then again, it could indicate something’s up with your cat. 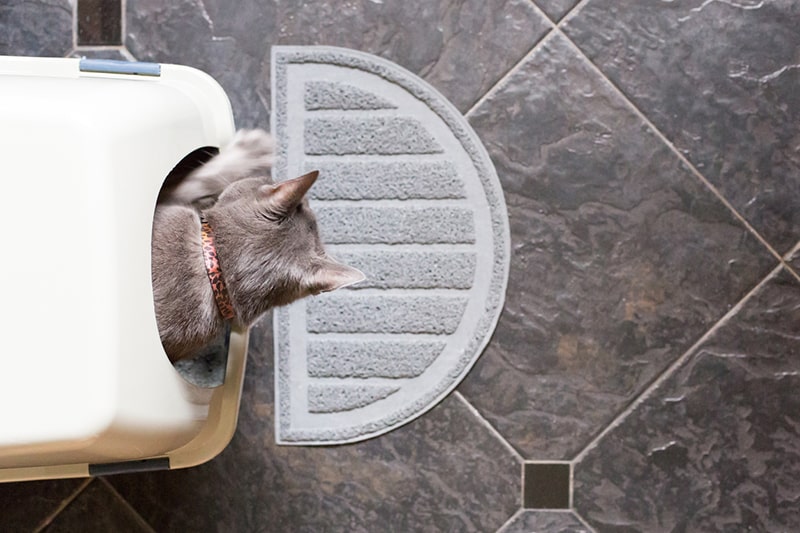 Healthy poop will typically be dark brown in color and not too soft or too hard. If it’s mushy or rock-solid, your cat might be having a health issue. If it’s watery, your cat is likely having a bout of diarrhea, which can be caused by:

Dairy products can also be bad for a cat’s tummy, so no saucers of milk for your feline friend.

Should cat poop be stinky?

Cat poop won’t smell like roses (some odor is normal), but it shouldn’t prompt you to run screaming from the room while holding your nose. If your cat’s litter box is stinking up the house, you should get in touch with your vet.

What are common causes of cat poop problems?

Issues with cat poop or changes in bathroom habits can be caused by a number of issues, from illnesses to anxiety. Your vet can help you get to the root of the problem, but here are some common causes of why your cat’s poop may not be solid.

Inflammatory Bowel Disease (IBD) is a chronic syndrome caused by irritation in the gastrointestinal tract that results in painful inflammation. Over time, this inflammation can turn normal tissue into fibrous scar-like tissue. Symptoms of IBD can include diarrhea, blood in the stool, and going to the bathroom more often than usual.

The underlying issue for IBD can’t always be detected or treated, but there are ways to help a cat with IBD. Food with a new protein source or one that is high in fiber can be helpful. Prescription medications can also be useful, especially if diet therapy doesn’t solve the problem.

Cats can suffer from tummy issues and poop problems if they are depressed or anxious, which can happen to any cat for a variety of reasons. For example, separation anxiety, changes in routine, a new baby or pet in the home, or not getting enough interaction can all be causes for a deeply saddened or stressed out kitty.

In some cases, cats just need time to adjust to a new situation. You can also address the issue on your own by giving your cat more attention if you think loneliness or boredom are behind these behavioral changes. However, if you can’t seem to get your cat out of that funk, you should seek help from your vet or an animal behaviorist. Prescription medications can sometimes help quell anxiety or alleviate depression. 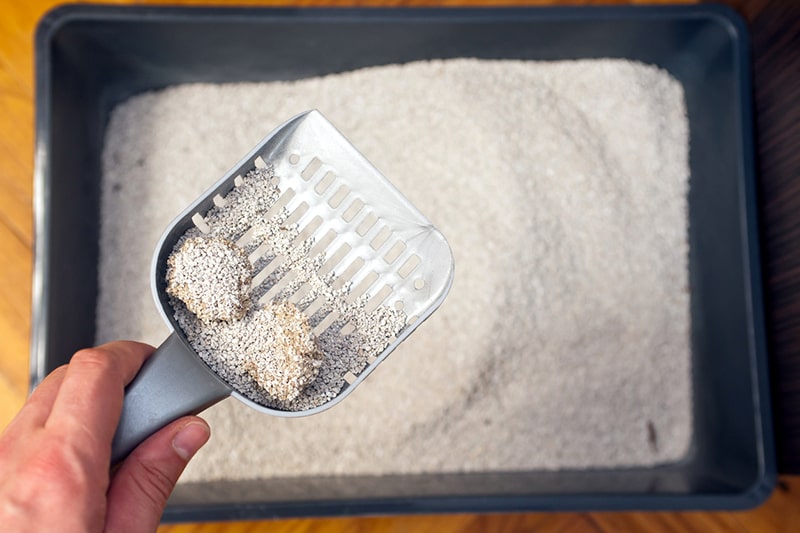 My cat is constipated—what should I do?

Cats who are straining to go to the bathroom or aren’t going at all are likely constipated. This can be caused by lots of factors, such as:

If your cat is constipated, give your vet a call for advice, especially if you suspect some sort of blockage or illness. Your cat may need surgery to remove the obstruction or treatment for the specific ailment. To help alleviate constipation, your vet may prescribe a stool softener, laxative, or other medication. Constipation can also be helped by:

What if there is blood in cat poop?

Don’t panic if you notice blood in your cat’s stool. It might just be that your cat had a bit of constipation and strained too hard while trying to go. If the problem continues and there’s a lot of blood, the blood is bright red, or other concerning symptoms come up, take your cat to the veterinarian. Your cat may have an issue that requires medical treatment, like infection, parasites, food allergy, polyps, cancer, or bowel obstruction.

Can cat poop be dangerous?

Handling cat poop may have an “eww” factor, but it isn’t typically dangerous. That said, there is a concern that cat poop can contain a parasite called Toxoplasma gondii, which causes Toxoplasmosis. You can also get Toxoplasmosis from eating raw or undercooked meat. Toxoplasmosis isn’t a big deal for most people who either won’t get sick or show only mild flu-like symptoms. However, it is of particular concern to pregnant women who can pass the parasites along to the unborn child and cause birth defects or even fetal death.

While this sounds scary, it’s good to know that contracting these parasites from the litter box is not a common occurrence. Cats infected with the parasite only excrete it for a short amount of time, and the parasites aren’t infective for at least 48 hours. That means if you’re scooping out the litter box daily, you greatly reduce the risk of infection.

Just to be safe, pregnant women should hand over litter box duties until the baby is born. If that’s not possible, scoop and clean the box wearing rubber gloves and thoroughly wash your hands after you’re done. Keeping your cat inside—which is recommended by our strategic partner The American Society for the Prevention of Cruelty to Animals® (ASPCA®) for all cats—can also help prevent them from contracting this parasite.

Why is my cat pooping outside of the box?

Pooping outside of the box can be your cat’s way of telling you something like “I don’t like it when you leave me home alone all day,” or “I’m upset that there’s a new pet in the house.” Your cat could also be making a statement about the litter box itself, such as:

Going outside of the box can also point to a health issue, so be sure to talk to your vet if the situation continues. 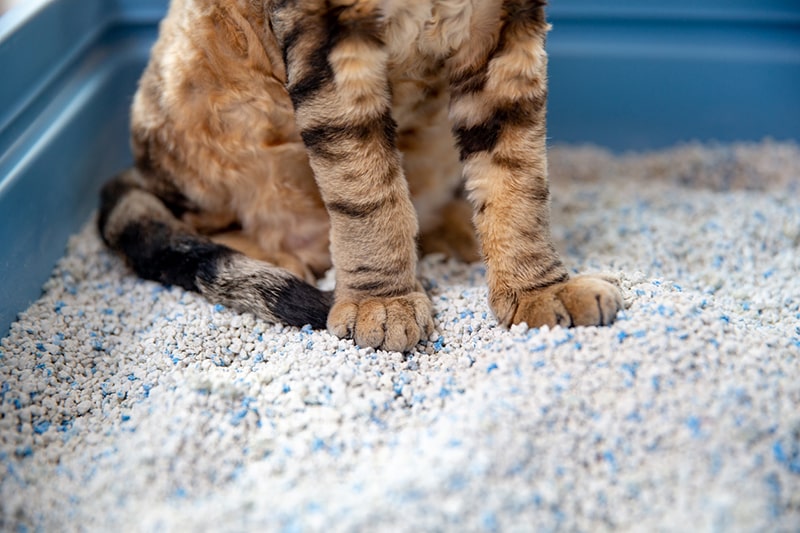 What can I do if my cat is kicking litter out?

Boy, was this a big issue in my house! My cat Zoe was kicking so much litter out of the box that the floor in the area felt like a sandy beach, and I had to keep a broom nearby just to keep up with this messy behavior.

To tackle this grainy issue, I first tried putting a top on the box with a flap in the front. Unfortunately, Zoe did not approve of the flap and let me know right away by pooping at the entrance to the box. However, she was okay with the top, which helped keep some of that litter inside.

I also put a mat under the litter box, which has helped a great deal. You can buy a mat like this online or at a store that sells pet supplies. The mat catches a lot of the litter that gets kicked out, so at least it doesn’t spread out all over the floor. While the problem isn’t completely solved, it’s much better now, and I don’t always have to sweep up before I start a load of wash.

I hope that answered all of your unasked questions about cat poop. I know I feel like a cat poop expert now—although I think I’ll avoid adding that to my resume ;)

What to Know Before Adopting a Cat

Learn more about the cat adoption process, what to consider before adopting a cat, and how to choose the right cat for you. 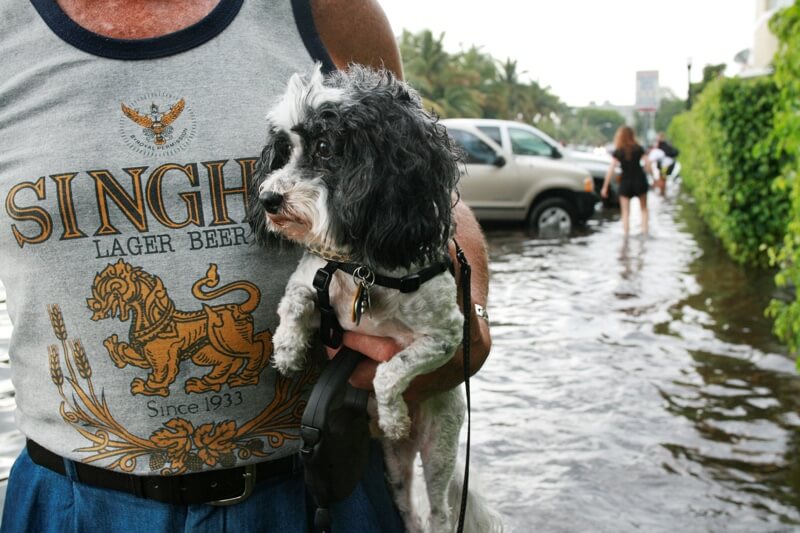 How to Make a Disaster Plan for Your Pets

When it comes to disaster planning, preparation is key! 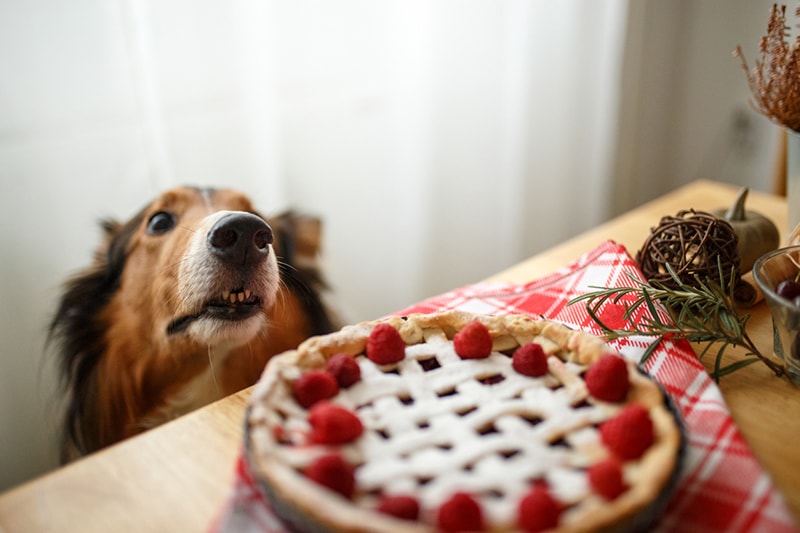 title: Inside Scoop on Cat Poop