Dogs on the Move: The Tail of Kenzi and Buck 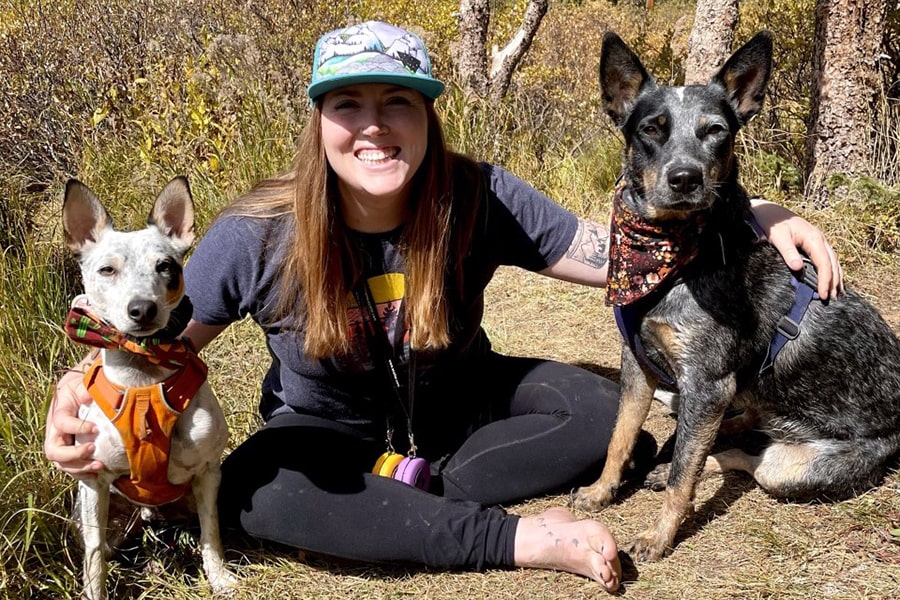 One of the greatest adventures a person can set out on is becoming a dog parent. You’ll learn many lessons throughout this journey, but you’ll also gain a best friend, comrade, and roommate for years to come. Our customer, Kristi, knows all too well how venturesome it can be to add some new pups to your family.

Her story, including how her ASPCA® Pet Health Insurance plan has helped her dogs, is one that many other pet parents may find relatable. After reading her testimonial about how helpful her pet insurance has been, we sat down with our policyholder, Kristi, to talk more about the importance of pet insurance and her experience with it.

Kristi and her husband knew that when it came time to adopt a dog, they wanted a Blue Heeler. They adored the breed, not just for their great looks but also for their charismatic personalities and bountiful amounts of energy.

In January 2020, after working with a local Blue Heeler rescue in Denver, they adopted Kenzi, a Blue Heeler mix. They learned that in her short life, she had already been abandoned in someone’s yard and lived with a foster family until she could find her forever home. Kristi and her husband were excited to open their hearts and home to such a deserving pup. Though the couple discussed signing Kenzi up for pet insurance coverage, the discussion often fell to the wayside, and they never officially chose a plan.

Only a couple of months after bringing her home, they faced their first health scare—Kenzi got hold of and ate rat poison. She was immediately taken to the emergency veterinarian, where she had to spend the night to receive treatment. At that point, Kenzi was not covered by a pet insurance plan, and the bill for her stay ended up costing a pretty penny. Soon after this incident, Kristi knew she wanted to sign Kenzi up for coverage with a pet insurance provider she had found.

In February of 2021, while searching around online, Kristi came across another Blue Heeler up for adoption through a rescue. The young dog had already been adopted once, but he was sent back to the rescue due to issues getting along with the adopter’s current dog. Kristi convinced her husband they needed this dog, too, and the couple soon welcomed Buck to their family. Having already dealt with one medical situation with their other dog, Kristi and her husband signed Buck up for his own pet insurance plan as soon as they brought him home.

Life with both dogs was beyond fun, but when they least expected it, they had another health scare. Upon sneaking into the kitchen, Buck got ahold of a bag of candy and many peppers sitting on the counter and consumed nearly the whole lot. After discovering what he had done, Kristi immediately called her veterinarian, and they recommended that she contact the ASPCA® Animal Poison Control Center.

Being the weekend, she was initially nervous about getting ahold of someone, but her worries were quickly swept away. She did some more research and discovered the ASPCA® Pet Health Insurance program.*

Kristi and her husband were already considering switching pet insurance plans since their current one continuously denied their claims. Even submitting claims began to feel like a huge ordeal, and the entire situation was frustrating. Continuing her research, Kristi discovered that there were plans offered by the ASPCA® Pet Health Insurance program that covered more items for a better price. They decided to switch their coverage.

Being dog parents that use their pets’ insurance a lot, Kristi and her husband quickly appreciated all the ASPCA® Pet Health Insurance program had to offer. From how easy the app is to use to how quickly their pet insurance claims are handled, Kristi continues to be surprised by the excellent service and the benefits of dog insurance.

“For us, our dogs are our family.”

Putting Pet Insurance to Good Use

As Colorado residents and active individuals, it’s not unusual for Kristi and her husband to hike 10-20 miles in one weekend with their dogs right by their sides. However, during one of these camping trips, they noticed Kenzi was limping.

Upon returning home, they contacted their veterinarian, and it was recommended that Kenzi rest. After a few days, she still wasn’t better, and she returned to the veterinarian to receive a full examination and an X-ray. They were able to rule out any broken bones, but Kenzi’s condition continued to decline. Within just a few weeks, the once active dog could barely make it to their mailbox, which was only a block away.

With Kenzi taking a turn for the worst and there still being no official diagnosis since it was difficult to tell what was occurring, Kristi and her husband took their sweet pup to an orthopedic specialist. After completing a CT scan, it was discovered that Kenzi had bilateral elbow dysplasia in her front legs. With the condition becoming painful and Kenzi still being so young, surgery was the recommended course of treatment.

Although Kristi and her husband were ready to do whatever was best for their dog, having insurance coverage for Kenzi helped make the decision for treatment that much easier. Elbow dysplasia in dogs can easily progress to a serious condition and could cause life-long issues if not properly treated. After receiving the surgery on both of her elbows, Kenzi’s road to recovery included an overnight stay at the clinic, crate rest for eight weeks, follow-up appointments with the surgeon, and eight weeks of physical therapy, including hydrotherapy at least once a week. During this time, she also needed to be carried up and down the steps.

It took a few months before she could finally begin doing things on her own again, but now her quality of life is fantastic. Her parents were so excited to have their healthy and pain-free Kenzi once again that they even took a “freedom trip” out to Moab, where Kenzi happily went on a nine-mile hike. Besides her parents, her canine sibling Buck was ecstatic to have his sister back to normal. It was no doubt a tricky time during Kenzi’s recovery when Buck had to be reminded not to play with or roughhouse his sister. 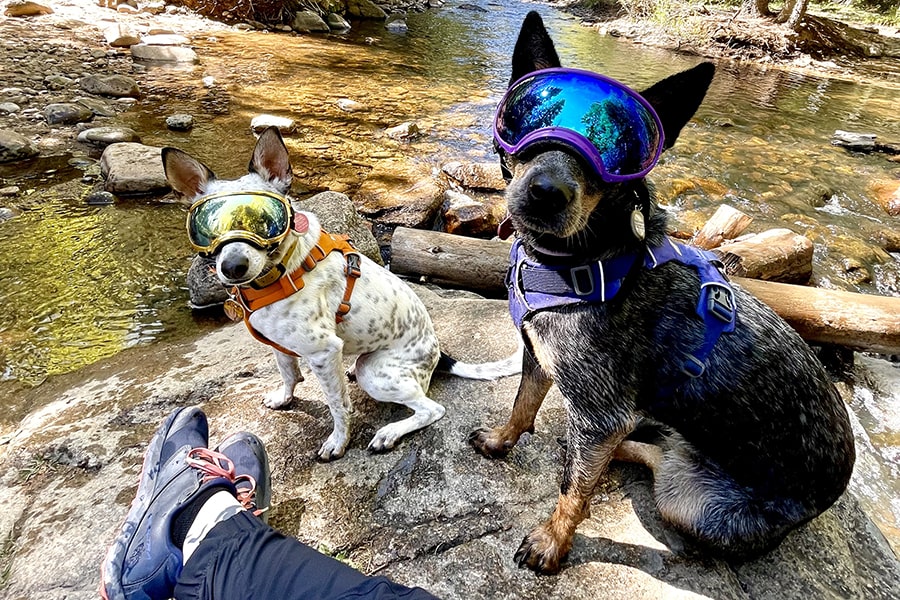 A Crazy Life With Two Canines

Further discussing why they value their pet insurance, Kristi explained that for two dogs, “It's really not that expensive. And it’s just a peace of mind that you have no matter what.” When budgeting for a pet, pet insurance costs are an expense that can easily be worked into your monthly finances. Depending on your plan options and your pet’s age, breed, and ZIP code, it may only cost the equivalent of a few coffees or a subscription.

Living with a dog, let alone multiple, can bring any number of unexpected twists and turns your way, and Kristi and her husband are no strangers to some of these surprises. As she light-heartedly notes, Kristi and her local veterinary clinic are on a first-name basis due to how many times they’ve had to call.

Since Kenzi and Buck’s more serious health issues were resolved, both have been affected by other illnesses, such as giardia, and Kenzi, also by gastritis. Kenzie also has severe anxiety, leading her to nervously eat things she shouldn’t. However, with their pet insurance plans, they are able to receive help for covered behavioral issues, for which Blue Heelers are known.

Even most recently, Kenzi had a little run-in with a cactus, but a sleek pair of doggy goggles for future ventures will help prevent that incident from occurring again.

Accident and illness insurance for pets can also include behavioral problems coverage. It’s important for pet parents to look after their pup’s mental well-being just as much as their physical health.

Knowing that they each have their own ASPCA® Pet Health Insurance plan, Kristi and her husband are able to take Kenzi and Buck on the greatest of adventures. With Colorado being such a dog-friendly state, whether the couple ventures to stores or breweries, their pups join them every time.

Both dogs have hiked and climbed fourteeners (a mountain with a peak of at least 14,000 feet), and they are about to set out on one of their greatest escapades yet—they are moving across the country to Kentucky. Kristi and her husband are more than excited to begin this new chapter with their pups right by their side. Their new state of residence will be filled with entirely new areas to hike and camp and the couple can’t wait to take their two best pals to the East coast and let them play in the ocean.

Testimonials represent individual experience only, and the experiences and opinions herein may be unique to the speaker. Individual results and pet insurance plans may vary. The information presented in this article is for educational and informational purposes only and does not constitute or substitute for the advice of your veterinarian.

Myths about pet insurance are simply that—a myth. Learn the facts before signing up your pet.

Pet insurance can be a great resource for pet parents. By customizing your plan, you can have a budget-friendly and affordable coverage option. 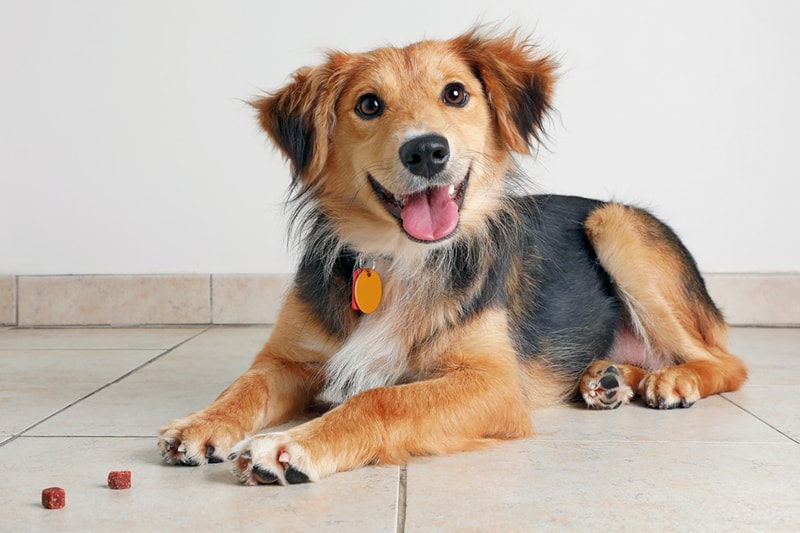 Is Pet Health Insurance Worth It?

For many people, the answer is yes! See why and find out how to lower your premium.

title: Dogs on the Move: The Tail of Kenzi and Buck