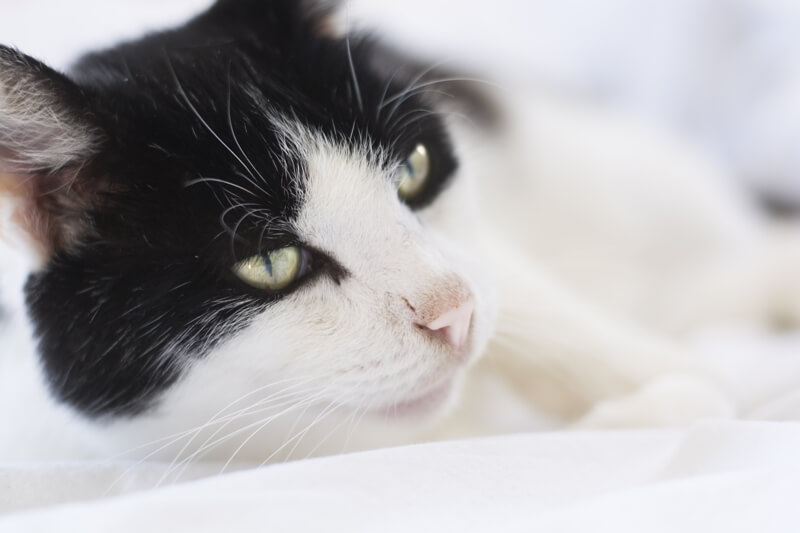 Any pet parent knows that watching your lovable fluff ball suffer through symptoms like cat vomiting, weight loss, or diarrhea is unbearable. What could be worse than discovering your kitty has an illness? We guess it probably feels worse to find out that your pet pal has three illnesses. Unfortunately, that’s exactly what happens if your cat gets diagnosed with triaditis.

Feline triaditis refers to the simultaneous inflammation of three different organs: the pancreas, the liver, and the intestines. It can be a little confusing because, in humans, triaditis is a condition that affects the portal triad, confining the illness to just the liver. However, the type of triaditis we’re talking about is unique to cats. It doesn’t affect dogs or any other species. Same name, different disorder. Triaditis in cats consists of three concurrent conditions:

Pancreatitis: Pancreatitis occurs when the pancreas, a small organ located in the abdomen that produces digestive enzymes, becomes irritated or inflamed. In humans, the condition is often linked to alcoholism, while in dogs it can be the result of high-fat diets or certain medications. Pancreatitis in cats could be due to bacterial infections, diabetes, or abdominal trauma, but the exact cause is unknown.

Inflammatory bowel disease (IBD): If your kitty has IBD, or chronically inflamed intestines, they are suffering from some pretty persistent stomach issues. IBD develops when cells from the immune system get into your li’l buddy’s intestines. It can also be linked to bacterial infections, genetic factors, and lymphoma.

Cholangitis: Cholangitis is the inflammation of the bile duct, the passageway that carries the bitter yellow digestive fluid from you pet pal’s gall bladder to their small intestine. Many veterinarians believe that triaditis most commonly starts with this condition, but it is possible for triaditis to originate in any of the three organs involved.

Why Are Cats Susceptible to Triaditis?

Triaditis in cats is a poorly understood condition, in part because no one knows exactly what causes it. Some believe it develops when dietary allergens stimulate the immune system, and others have theories that it is the result of bacterial infections or hereditary factors (though no specific breed is predisposed). However, there is a good chance that your kitty’s own anatomy is part of the problem. Unlike dogs, a cat’s main bile duct and pancreatic duct share one common opening to the small intestine, called the duodenum. This duodenum is believed to have 100 times more bacteria than similar openings in dogs! In any case, it probably explains why it's so easy for illness to spread from one organ to another. 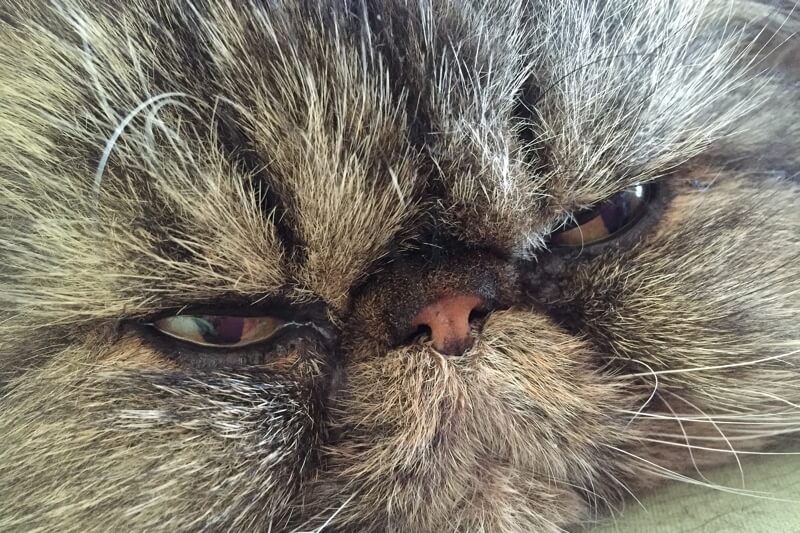 Triaditis symptoms can vary quite a bit from cat to cat in terms of both severity and which symptoms are present. To make matters worse, some of our feline friends exhibit no symptoms at all. However, you should play it safe and contact your veterinarian right away if you observe any of these symptoms in your kitty:

The three conditions share many of these symptoms, but there are a few that are more common with just one illness. For instance, abdominal pain is usually tied to pancreatitis, diarrhea is most often associated with IBD, and jaundice is probably the result of cholangitis. Just remember that any of the symptoms listed is reason enough to call your pal’s veterinarian.

How to Diagnose Triaditis in Cats

Because triaditis only occurs when three separate conditions – that share many common symptoms – are present, it can be tough to diagnose. In fact, the only way to definitively diagnose triaditis is for your veterinarian to perform biopsies on tissues from all three potentially affected organs. This isn’t done very often, though, because it is invasive and costly.

After getting a detailed medical history, your veterinarian will most likely take X-rays to rule out other conditions, complete bloodwork to look for infections and monitor GI functions, and use ultrasounds to detect inflammation. 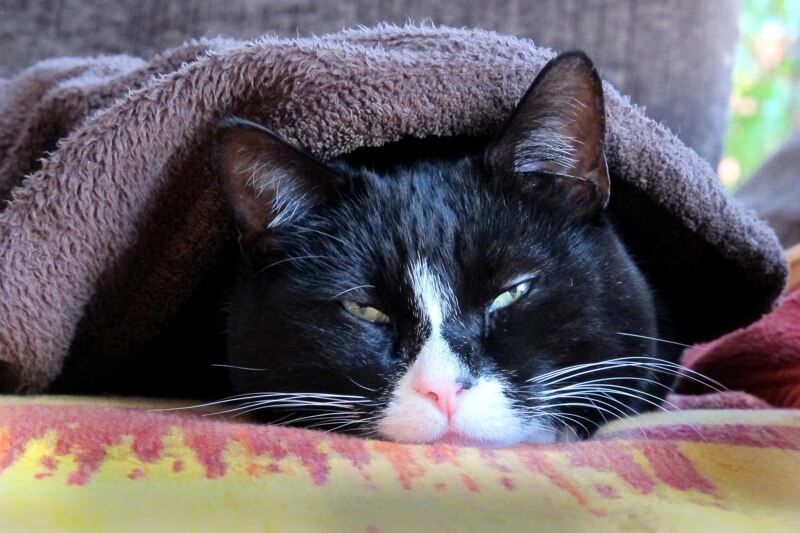 The bad news is that triaditis cannot be cured, but the good news is that it can be controlled fairly well. Treatment is supportive, meaning that it centers on symptom relief. With the right combination of medications and regular checkups, your kitty can still lead a comfortable life.

Need help getting your cat to take their medication? Check out these tips.

You can help prevent those rotten symptoms, too, with nutritional support and stress reduction. Talk with your veterinarian about developing a proactive meal plan, but in general, grain-free wet food (either canned or homemade) is best for cats with triaditis. It’s important to monitor your kitty’s calorie intake so you can help make sure they don’t develop fatty liver disease. Also keep an eye on water consumption. If your pal is severely dehydrated, they may need to be hospitalized to receive IV fluids.

In terms of stress, major changes to your li’l buddy’s routine can cause anxiety. If you’re moving, adding a new family member (furry or human!), or starting a new job with different hours, make sure to give your kitty some extra attention.

Diagnosing your pal’s triaditis can be time-consuming, and treating it can require a combination of medications, dietary guidance, and frequent vet visits – all of which can add up fast. Is your cat covered? An ASPCA Pet Health Insurance plan can help you spend more time cuddling your kitty and less time worrying about the cost of care. Get a free quote now! 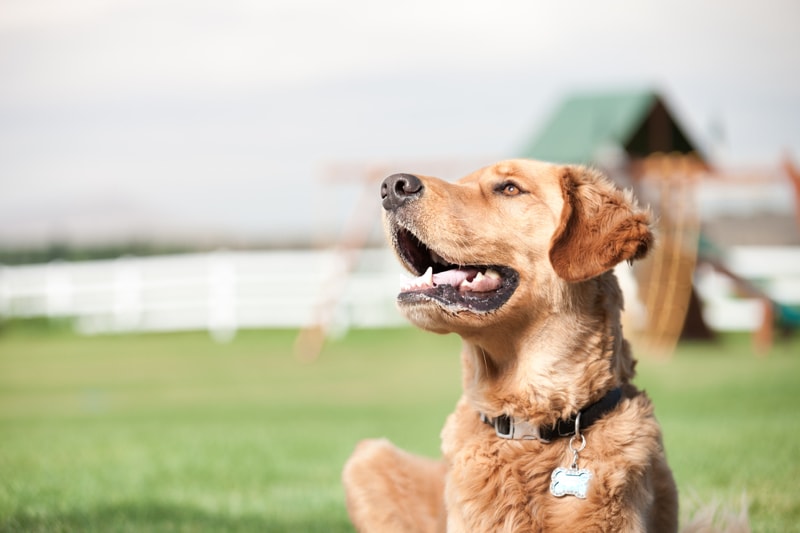 The Dangers of Lyme Disease for Your Pet

Whether your pet likes to accompany you on outdoor adventures or if they're more of a homebody, they're still susceptible to Lyme disease. Learn more about the most common tick-transmitted disease and tips for preventing its spread.

Did you know that cats can get colds just like humans? Learn more about feline cold symptoms, treatment options, and prevention tips. 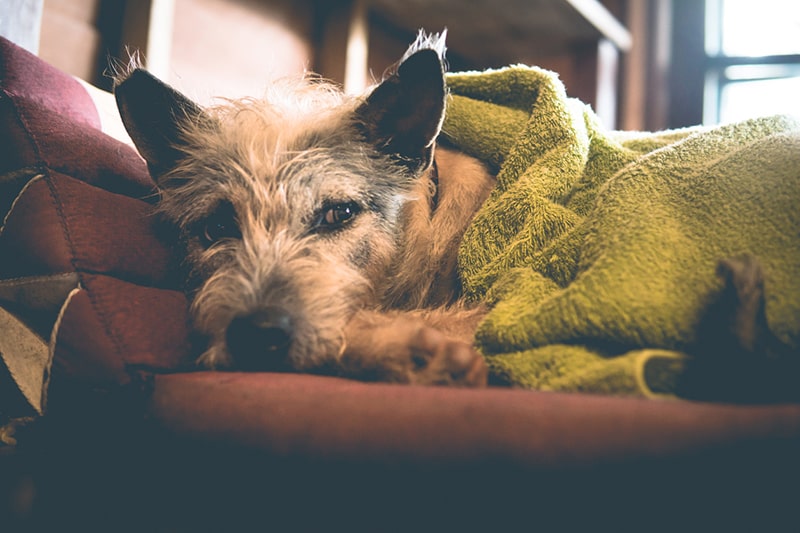 Pets and COVID-19: What You Need to Know

Find out more about coronavirus (COVID-19) and pets, what pet health insurance covers, and how to spot if your pet isn’t feeling well.